A Christian’s vocation is sanctity, in every moment of life. In the springtime of their youth, in the fullness of summer at the age of maturity, and also after in the autumn and winter of old age, and at last, at the hour of death.” (Pope John Paul II) The…

With the motto “Laudato Si” Sisters Maria Madre Celestial and Maria Czestochowa participated in a pilgrimage to Assisi guided by Archbishop Jean-Claude Hollerich and in which 80 people participated including youth and leaders.

St. Francis came from a wealthy family- his father sold fabric- and lived a carefree childhood and youth, cultivating ideas of knights and chivalry from his time. When he was twenty he joined the military and was taken prisoner. He became ill and was freed. After his return to Assisi, he began a slow process of spiritual conversion that led him to gradually leave the worldly life he had lived.  At this time St. Francis’s famous encounter with the leper took place, where Francis, got off his horse, gave the Kiss of peace and the message of the Crucifix from St. Damian’s Church. Christ on the Cross came to life on three different occasions and said “See, Francis, and repair my Church from its ruins.” And from there began his process of conversion.

We began our journey on the night of the 17th of July and we arrived the following morning to the land of St. Francis.  In the evening on the 18th we went on a walk to the Basilica of St. Francis which took us an hour and fifteen minutes. At the Basilica we had Mass, celebrated by one of our chaplains. 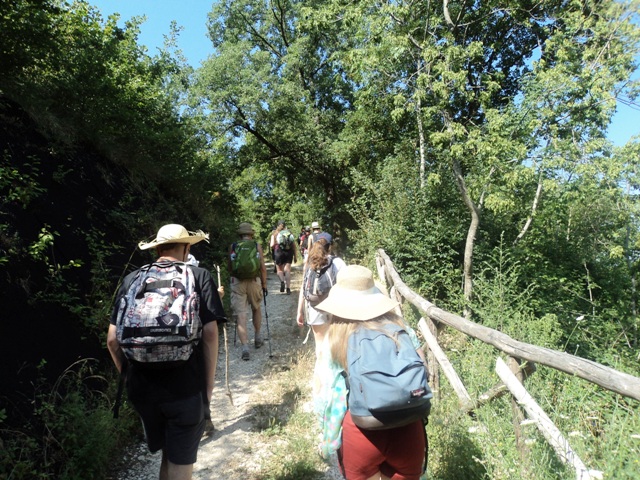