Our Directory of Spirituality says that “anyone who wants to lead a perfect life need do nothing but despise what Christ despised (on the Cross) and love what Christ loved (on it). Just as on the cross He taught us what we should love, so as a child in Bethlehem…

“Behold, the virgin shall conceive and bear a son, and they shall call his name Immanuel” (which means, God with us). 1 On December 16th, we had a Christmas Party and Christmas Play with the children from Oratory and catechism classes.          We  began the Christmas party at 4 o´clock…

“The works of mercy are charitable actions by which we come to the aid of our neighbor in his spiritual and bodily necessities.”* For Christmas our girls group “Daughters of Mary” did a small work of mercy by visiting the sick of our parish in Pumpėnai. On December 29th we went…

For the last two weeks in Stykkishólmur we´ve been preparing the children in various ways for the joy of Christmas. With our oratory, we held the traditional Icelandic „Christmas Crafts“ called „Jólafundur“ and we spoke to the children in the chapel about how we can make Baby Jesus´s crib softer…

We will begin our story of the Advent and Christmas seasons lived in our beloved town, Stykkishólmur, Iceland, with the retreat for children. With the retreat, we began this powerful time of conversion and grace.

One soul in the state of grace is worth more than all the goods of the world, and it is for this reason that Stykkishólmur changed from a simple town in the Northwest of Iceland into one of the most powerful, beautiful and noble kingdoms, because of the grace which the reception of the sacraments brings. The children from the three towns in which we teach catechism, arrived one Saturday morning, and we began the retreat with “Good mornings” about the joy of Catholic Christian life.

After that, we played games and shared lunch altogether. Later, a little talk was presented about Jesus Christ, true God and true man. Later, while we were praying the Rosary, the children had the opportunity to go to confession.

Following confessions, the Holy Mass was celebrated, and some of the children helped as alter servers. All of the children received the Eucharist. They were all very happy, especially for the reception of the sacraments. Many of these children hadn´t approached the sacrament of confession for some years, and the fruits were significant, marked by the joy they manifested afterwards. 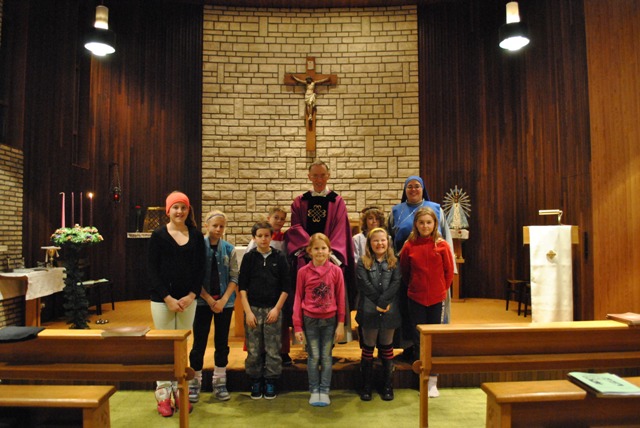